(See, this is the date I started the post. Sorry I took so long to post it, y'all.)

Sweet relief. On a scale of one to ten, (as I was later asked) getting in the tub took my pain level from a 9 to a 7. By my standards at that point, this was nothing short of a miracle. I started out seated on a small ledge in the tub. Nick went around behind the tub so that he would be right by my head the whole time. I had a few contractions like this, then had to change positions again. Being on my hands and knees felt so much more comfortable... I think leaning forward took some of the pressure off of my back. One of the nurses took a barf bucket and used it to keep pouring water over my back as the tub continued to fill.

With every contraction, I squeezed Nick's hand. In between, he offered me water, kept my hair out of my face, and told me what a good job I was doing.

The nurse, telling me: "This is the worst part. It doesn't get worse than this!"

(Yes, that thought was oddly comforting. Like, well, here I am, already in the middle of it, and I'm still alive. Not I am SUPERWOMAN I can do this, but more like I can SURVIVE this because, hell... I already AM surviving it!)

(I am SUPERWOMAN came later.)

My amazing husband, who never left my side: "I know baby... not too much longer! You're doing so well!"

I must say I'm proud of myself for never saying "I can't do this!" The TV shows and the internets tell us that when the woman yells something to that effect, "I give up" = Ready to go! and you all know how I feel about doing the thing that everybody always does.

It was sudden, just like that! I was so scared at this point... this is where most women who tell the story say that they get excited (until they remember hearing tales of the Ring Of Fire), I'm going to meet my baby soon! Me? Scared. What if I didn't push right? I didn't know what the hell I was doing!

But the thought was fleeting. Colleen the midwife asked me if I wanted to get out of the tub. I told her no, DO NOT WANT. I didn't think I could. I wanted to push. So she told me that if I could feel him coming and felt the urge to push, I should push.

The first time I pushed, I screamed. Because it hurt. The nurse said the thing about using the energy that I was wasting by screaming to bear down. I wanted to tell her to shut the hell up, but I figured that wouldn't do any good, and she was the one pouring the lovely water over my back, so I didn't want to piss her off. Irrational, I know, but oh crap! Here comes the next one!

I pushed through the contractions, and I rested in between. Nobody counted. I flipped around in the tub (it came with these cool little divots for your to put your heels in and push against) but being on my back was still not working, so I flipped back onto all fours again.

Nobody holding my legs, nobody staring at my crotch, no stirrups.

I ended up mostly growling as I pushed... I think it helped me focus, and the nurse didn't correct me. I think she even told me I was doing well. I do know that Nick was there, right by my head (have I mentioned he was amazingly perfectly supportive? That he said all the right things and never left my side?) telling me to "GIVE IT HELL BABY!"

I pushed three or four times, then I felt it. His head. Was coming.

I pushed... someone said: the baby's crowning!

I pushed... I yelled... and suddenly I was kneeling upright in the tub... someone said: the head is out!

They had me lean back. I'm so tired.

Someone: "One more push and he will be!"

In my head, all I could think was: Ok, one more. That's what she said. I only have to push one more time. Once more. I remember being terrified that it wouldn't be just One More and Oh God What would happen then???

I pushed one more time.

Nick, behind my right shoulder: "He's here! Oh my God there he is!"

I opened my eyes, and saw my baby being pulled up out of the water and placed on my chest. I reached up to cradle him. I was not surprised, yet stunned by the tiny boy with the full head of hair. Mine.

Again, the next few minutes are a blur. Nick reaches out to carress the tiny hand. He gives me a kiss. They have him cut the cord. I touch the tiny cheek and say, "Hi baby."

I sat there and stared at my baby for I don't know how long, until someone asked me if it was ok if they took him and wrapped him up so I could get out of the tub. I had forgotten I was in the tub. They kept saying what a "nice, long umbilical cord" we had. Super.

(At this point, I'm tempted to censor the story, but I won't.)

I sort of snapped back into reality and looked around to find myself sitting in a murky tub full of bloody water. There is a smear of white goo on my top where Oliver had just been laying, but I don't remember him being slimy at all, just wet. There is a splatter of blood on my arm, hand and the side wall of the tub that had come from the umbilical cord. As I'm getting up the midwife is telling me that it's because the placenta/cord combo has a lot of built up pressure (think: blood and nutrients must pump into the baby) and isn't it amazing how that works. Whatever.

Why won't my legs stop shaking?!?

At this point, I think we're down to just two nurses and the midwife. One nurse is tending to Oliver, the other is helping me get into bed. The midwife tells me I now have to push out the placenta. Dammit! I thought I was done with the pushing! And somebody please tell me why my legs are shaking!

She tells me to push, so I give a half-hearted push, and out plops the placenta. Weird and gross. Honestly, it looked like a clear plastic bag full of puke. I know it's supposed to be all beautiful, "tree of life", this is what sustained my son for 9 months, but... yuk.

I look over to see my boys: Nick staring down into a tiny bundle of blankets, so dreamy... then OUCH!

The midwife is poking around at my sore, bruised parts and saying things about how I only have a few small tears, and she probably won't even stitch them up. "Skid marks." I'm finally coherent enough to ask, "Why are my legs shaking?" She tells me it's the hormones, and that my body just went through a lot (really? DUH) and the hormones need a little while calm down. She also tells me that I've just had what they call precipitous labor, meaning that it lasted three hours or less, since his time of birth was 2:56 am.

I don't know how many times I looked at Nick and said, "I can't believe I just did that."

That thought alternated with I AM SUPERWOMAN over the next few days, but it was mostly I Can't Believe I Just Did That. All in all, it was very scary, but we both came through it and ended up healthy, so of course that is all any mom could ask for. 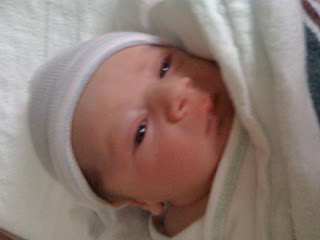