The One Where I Almost Dropped the Baby

So, this weekend went well. We got a bit of the cleaning done... Nick dusted and vaccuumed, and I did laundry and started organizing the paperwork. Sunday night as we settled in to watch Extreme Makeover: Home Edition (OMG KISS) I started feeling guilty, thinking I could have done more. I mean, I had TWO WHOLE DAYS and this is all I got done??


But, baby steps. It's ridiculous for me to expect to get everything done in one weekend. Besides, we did leave the house... so it's not like I spent those two days on the couch, settled into my comfy butt dent, watching my sweet baby sleep. Well, I did do that, but not ALL weekend, which is the point. Balance. Baby steps. Small victories.

Anyway, one of the things we did outside of the house was go to Costco. Yay for wearing our grownup pants! Because bulk toilet paper & ground meat = grownups, right? Anyway, we now have our membership cards, complete with icky little black & white pictures.

So here's the real story: We get home from Costco, and Ollie's starting to fuss and make his hungry face. 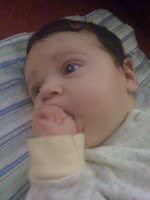 I scoop him up out of the carseat and head toward the living room... probably munching on his cheeks or something. (As many times as I've replayed this in my head, I still don't exactly know what happened.)

I turn the corner to go from the dining room into the living room, not realizing that the GATE to keep the dog off the couch is still in the doorway. I fall forward, landing on my knees on the gate.
As I'm trying to stand up, Nick rushes in, "OMG are you OK?!? " Oliver's crying, and I can't remember if he was crying before I fell. I'm crying.
"Are you OK??!?"
"I don't know. Take him. Is he OK?"
"He's OK."

I slowly get up off the floor and hobble back to the bedroom.
"Check his head... did I bonk him?"
"He's OK honey... you had your hand behind his head."
"I did?"

So I take my pants off, because I'm sure that my knees are bleeding. They are not, but the left one is pretty badly scraped and both are really lumpy and already turning purple.

I lay in bed, on my side, to feed him. He stops crying, starts eating. I'm stroking the back of his little head, feeling for lumps. I'm still crying, and replaying the whole thing over and over again in my head... Did his head hit the ground? Mommy FAIL.

Nick says that I was already starting to stand up when he came into the room. He says I had my hand behind his head. All I remember is BANG slam CRASH ouch WAHHH!

Ollie starts to doze off and I start thinking what if he has a concussion? Isn't that when I'm not supposed to let him fall asleep or he will slip into a coma? Needless to say, we spent about an hour laying in bed, until I was sure he was OK and felt like getting up.

So, yes. There's my big update for the week. That's the plan, anyway, at least once a week until I'm all caught up. But I'm slow at work today, so I'll probably work on a few. Y'all may get lucky next week
Posted by Sara at 11:01 AM