So, everyone knows Netflix = Awesome. And ever since we quit cable we’ve been watching a lot of hulu and Netflix between 8 and 10 pm – after the boy goes to sleep and we have a few minutes to veg.

The last movie we got on DVD was Inception. It. Was. Fucking. Awesome. Seriously awesome. If you haven’t seen it, rent it or add it to your queue right now!

The other day I had a conversation with my friend Dan, who has seen Inception twice, and he mentioned that he thinks it’s just as good the second time because you'll catch things you didn't the first time, including some plot holes.

I told him that I already spotted a couple, because good movies like this that really get you thinking tend to stick around in my head for a while. Which is ironic, considering that “inception” refers to the concept of implanting an idea into someone else’s head – making them think it was their own idea.


If they were never supposed to go any "deeper" than that third dream, the one with all the snow and shit, how did they happen to have one of those sedative machines that let Cobb and the-girl-what’s-her-name-from-Juno go into limbo after their Target Guy when Mal killed him?

Dan’s example, which I think is also a good example of the difference between men and women:


In Dream One the driver takes the team off the bridge, they are falling towards the water. As such, in Dream Two the dreamers experience zero gravity (in the hotel). So, why don't the dreamers in Dream Three (snow fortress) experience zero gravity? Answer: because zero G looks awesome in a hotel. Zero G on a mountain top involves a lot of people floating off into space and dying.

I thought it had something to do with the fact that time stretches out in subsequent dreams, like they had 30 seconds in dream one, which gave them 20 minutes in dream two and then 2 hours in dream three... so the floaty effects are dampened.

Yah, you could say that. But I think they just goofed.

Right. So the difference is, boys see things in terms of action and special effects, and girls see them in terms of… basic facts and linear story lines. I don’t know, maybe I’m not a philosopher.

Anyhow, after that, I had a little revelation about myself. I don't like plot holes. So, if I find an adequate explanation, I stick with it. So my mind can rest. I’m the type of person who picks at hangnails and threads... plot holes unnerve me. *spoiler alert* I have absolutely refused to let any other possibility enter my mind: that damn top WAS WOBBLING at the end!

I don’t watch the news, because if I do, all the sad puppies and missing children of the world will visit my dreams. They say a picture is worth a thousand words, and that is so true for me. My balance is easily thrown off by images, leaving me feeling haunted by their stories. Without even closing my eyes, I can still see the chubby face and pink jacket of the 4-month old baby girl who somehow survived the tsunami in Japan. I can almost feel the intense overwhelming pain her parents must have felt… and if this story had had an unhappy ending?

Emotionally Sensitive. I have trouble distancing myself from the rest of the world mentally. At least that's what that therapist said. Other people's hurt is my hurt.

But, it's not bad all the time... it works both ways. Other people's joy is my heart-pounding success. I am Jack’s medulla oblongata.

I get choked up when someone wins big on Wheel of Fortune. When Michael Scott proposed to Holly on the Office, I got a lump in my throat.

I tear up reading those stories about children and kitty-cats who love so purely, and who dial 911 and save the day. And the high school basketball towel boy who was happy to just be part of the team? And then they put him in the last game of the year? And he makes that half-court shot and the crowd goes wild and the team lifts him up on their skinny teenage shoulders? Yes, that noise you hear is in fact me, having a good ugly cry.

When I feel happy, I am unstoppable, on top of the world!* Like last Friday, I was looking forward to going out to dinner with my lovely husband, and that alone kept my mood lifted to just above where anything else could touch it… there was no getting me down.

So looking forward to our trip to Florida in three weeks, when I say I’m excited, you know I’m seriously freaking excited. The thought my babe and his grandparents will get to charge down the beach together and splash in the ocean? I am looking more forward to this trip than anything, at all, ever. The potential energy in the potential memories makes me unable to stop smiling.

And when I talk about how happy I am, how these guys make my life better than I could have imagined? You know that shit is the God’s-honest truth. 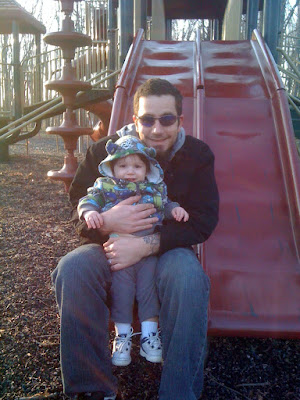 *Yes, I realize this makes me sound manic-depressive, but it’s not to that extreme… I don’t actually have huge mood swings. I’m just describing what goes on inside, and that I’m still learning about myself.
Posted by Sara at 1:54 PM

Email ThisBlogThis!Share to TwitterShare to FacebookShare to Pinterest
Labels: about me, good times, love