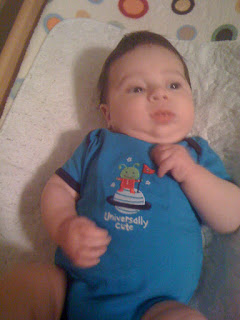 Hey guys. Thanks for stopping by. Check out my chins.

Right then. So here are some post-partum thoughts, things I needed to get out of my head, and random updates... all neatly organized into numbered lists. You're welcome. *wink*

What I learned from being pregnant:
Things I wish I could go back in time & change during my maternity leave:
*Giving credit where credit is due - I'd like to give a big shout out to breastfeeding because a) I still have not (knock on wood) gotten a post partum period; and b) it requires an extra 500 calories (approximately) to produce breastmilk, which is directly responsible for my weighing less now than I did before becoming pregnant. Woot!

Stuff I loved & am glad I had around:
Stuff I bought because somebody said I was supposed to, but just turned out to be useless:
Honorable mention: the Diaper Genie.
*For the record: Postpartum hair loss? I haz it. Apparently, it likes to start being noticable around 3 months post partum. Just in time for your kid to get really good at grabbing handfuls! Yippee!
Posted by Sara at 10:01 AM